EyeVerify: Use Your Eye to Unlock Your Smartphone

With so many ways of unlocking your smart device starting with the standard password and ending with the face and fingerprint unlock, Samsung has been recently spotted trying to gain a patent for an iris recognition system. The Kansas City-based company, EyeVerify thinks that this new system will allow users to protect their personal data better while keeping the mobile device more secure. The Eyeprint technology is used to scan a user’s eye veins and grant them access to a phone or even an application.

So far, despite the fact that the system is under testing, a prototype app was revealed running on an iPod, and it was used to show how Eyeprint works by using the front or the rear camera of a handset. In the case of the rear camera, things are even clearer because the technology makes use of the LED flash in order to get a solid image of the eye.

In the case of the front camera, the EyeVerify states that users need at least a 2-MP shooter or higher in order to get a good image of your iris. The verification process requires a user to look to the very right and left with their eyeballs in order to ensure a full picture of the eye veins. 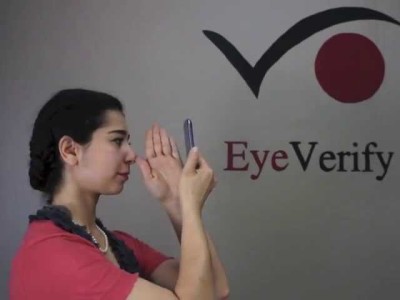 EyeVerify: Use Your Eye to Unlock Your Smartphone

In other to make things happening, EyeVerify plan to start a beta program from March through May that will offer developers a clear view of what the prototype will look like. In the same time, the company will release other prototype apps, SDK and various technical documentation. As far as the technology itself is concerned, EyeVerify suggests that this system is more accurate than facial recognition, and it offers a higher level of security.

Biometric identification is not something new, but it is definitely something that will gather people’s attention. As it was mentioned above, other interesting unlocking technologies are meant to protect out devices. While the Android has its facial recognition, the new iPhone 5S came with a brand new fingerprint scanner which grants access only for the owner of the respective device. In order to compete with these products, Samsung focused on developing the iris scanning recognition.

EyeVerify works on the same basis as the facial and fingerprint scanner technologies, but it uses a more complicated and detailed overlook aspect of the human eye: the blood vessels. As some of you might know, the blood vessels are unique to each person, just as fingerprints.

The company develops the software required for this scanning system and provides it to the public as a plugin. Moreover, it licenses this technology to clients such as Fixmo or AirWatch, who will offer it to other clients, some of which include the military and government organization. However, the eye scanning technology and the fingerprint-unlocking scanner are new things in the world of technology and people will continue to be a little bit skeptical, proffering to stick with the old pattern or PIN unlocking system.