One of America’s leading carriers, the US Cellular, has revealed the fact that Samsung Galaxy S4 Mini is now available at the regional carrier having a mini price. The device costs only $49.99 with a signed two-year contract. The small price will definitely be noticed compared to its competition. Verizon is currently offering the S4 Mini for the $99.99 on contract price. In what concerns other major carrier, Sprint offers the same smart mini smartphone for free if users trade-in their old phones and port over the number. For not trading in an old device or signing a contract, both Verizon and Sprint are $100 cheaper than the US Cellular at $399.99.

Although the carrier did not offer something official to announce the offering of Samsung Galaxy S4 Mini among its other products, the carrier is now selling the device for the small price of $50 on a two-year contract. The tiny smartphone was supposed to reach the carrier at some point in November, but no one knew for sure until the phone just popped out in its online store. 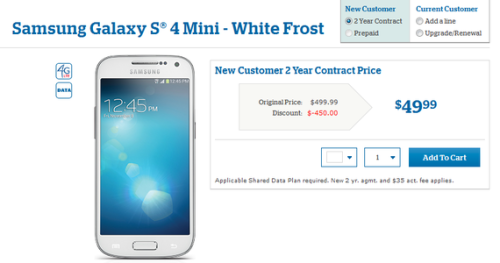 The device itself is only a replica of the original Samsung Galaxy S4 Mini. The handset offers a 4.3-inch Super AMOLED display with a resolution of 540 x 960, and it is powered by a dual-core 1.7 GHz Qualcomm Snapdragon 400. Moreover, users will get 1.5 GB of RAM along with 8GB of native storage. However, as expected, only 5GB is available for the user. In the same time, along with the S4 Mini, users will have the opportunity to take pictures with a 8MP rear-facing camera which captures video in 1080 x 1920 at 30 fps while the 1.9 MP front-camera is great for self-portraits or video chats. In the same time, the device comes with Android 4.2.2 pre-installed out of the box.

Within the US Cellular online store, the Galaxy S4 Mini comes in white or black, as standard colors, but users will get the same experience as those who own the S4 Mini internationally or in the states on Verizon, or other carriers. However, once you are visiting the online store, check out the rest of the promotions. Along with the incoming Black Friday, the carrier has prepared many gifts and promotions, and if you are lucky, you will find other devices such as Moto X, at free on-contract.