It has been reported that three major Canadian carriers unveiled the much-awaited Android 4.3 update for Samsung Galaxy S4 and Samsung Galaxy S4 Mini. Customers of the three big carriers and namely Bell, Rogers and Telus, give users the possibility to upgrade two of the most beloved smartphones at the Android 4.3 Jelly Bean. The update is sized at a massive 790 MP, and it brings the well-awaited features and security issues that were introduced in the Android 4.3 update. 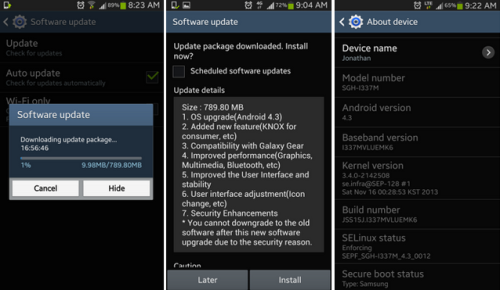 Android 4.3 for Galaxy S4 and S4 Mini in Canada

In the same time, the update changes the build number of Galaxy S4 to I337MVLUEMK6 while the build for the Mini version will be I257MVLUAMK5. The update is being rolled out over-the-air, and it is supposed to hit all devices in the upcoming days.

The update will make both devices compatible with the Samsung’s smartwatch, the Galaxy Gear while adding increased performance and UI improvements along with the already mentioned security enhancements. Along with the performance improvements, along with the update, users will be able to enjoy various slight visual refreshes to some icons and menus, as well as brand new apps and features.

As you know, normally, it takes a couple of days for the OTA update to reach all devices in an area, but if you are eager to test out the new features, you are free to manually check it by visiting the Settings app, in the About section, at the Software Update option.

However, it is worth mentioning the fact that a couple of users already encountered various problems after updating their device to the Android 4.3 firmware such as poor battery time, interrupted Wi-Fi connections, gallery app problems, screen blackouts and more. It is best for you to wait a couple of days to see if these problems are fixed, and then you can easily upgrade your device to the Jelly Bean version of Android.