The leaked images and specs released yesterday concerning the up-coming of the new Samsung smartphone have been confirmed today. The Hungarian Tech2 website has revealed some images with Samsung Galaxy S Duos 2, an affordable device which follows its predecessor`s footstep. The smart will be seen in all the smartphone stores across India in a couple of days now, at a reasonable alleged price of Rs. 11,230; the price is considerably lower than the Galaxy S Duos and might indicate the fact that Samsung understands the Indian market, which basically relies on low-price devices, and also tries to cope with the Indian cheap smartphone demands on this matter.

As our source states, the device will be equipped with 1.2 dual-core processor which relies on a 4-inch display of 480×800 pixel resolution. Like its older Galaxy Duos S, it also supports a rear camera of 5 MP for good-quality pictures during the day light, an internal memory of 4GB and a microSD card which can support the storage up to 32 GB. 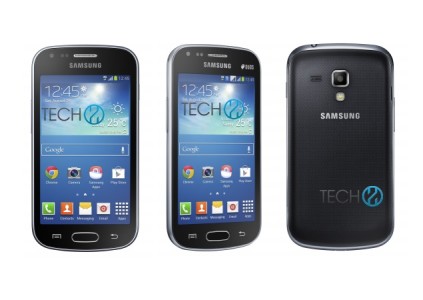 The source also reveals that Galaxy S Duos 2 will smoothly run on Android 4.2 Jelly Bean, which will definitely suit every Indian`s needs in terms of high-premium apps and specs seen on the major smartphones, apps like Multi-Window tasking.

All we have to do is wait for a couple of days to find out the official tag price for the new S Duos which promises a lower promise, but it seems that it will not be as great as its original S Duos in terms of specs and features.