Oppo, the new Chinese phone maker, teased the new arrival of Oppo R1 a couple of days ago, a smartphone that would come with a camera specially made for low-light photos; the phone is due to arrive somewhere in late December. The news with the launch Oppo R1 started when Otto Company released some photos with the device on Sina Weibo network, revealing the phone in colors of white and black. This was just a little tease, since the network didn’t reveal any of the phone`s specs; instead it did mention quite a few things about the phone`s camera.

Oppo R1 promises to reinvent the night shooting mode by coming with an 8 MP rear camera with movement sensors and image stabilizer that will give the chance to take accurate and crystal clear photos in low-light situations. 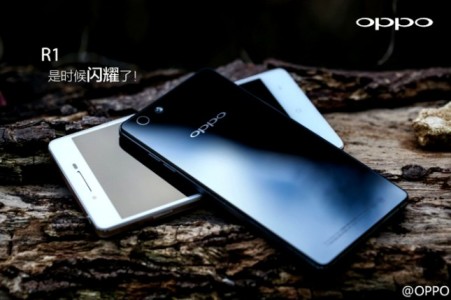 As a confirmation from our source concerning the Oppo`s specs, it is believed that the device will come with a 1.2 GHz quad-core processor and 1 GB of RAM. It would also enhance a 5-inch display but with not that great resolution, of just about 960×540, with less pixels than other major smartphones on the market.

In terms of price, due to its mid-range specifications, the Oppo R1 will be likely to compete with the Chinese Lenovo, from Xiaomi and its direct competitor Huawei. But what makes the phone stand higher against these two devices, is its superior camera. The phone will be sold first in China in late December, and so far, there is no pricing listed for the device.

Apart from the up-coming Oppo R1, there is a device that will be sold outside China, which is the fresh Oppo N1, that will feature a great and powerful 13 MP camera. As a premiere, it will be sold with CyanogenMod in the U.S. starting with December 10, costing $699.

Well folks, what do you think: Oppo R1 inside the box, or Oppo N1 the superior phone for such a high price in the U.S?