Asus PadFone Mini comes as a hybrid Android tablet / phone, if we take in consideration the listing from the Global Certification Forum. First of all, we must tell you that it has nothing to do with Asus’ line of products, excepting the name. This device is, just as we have told you, some sort of a smartphone that can slide into a special dock in order to function as a tablet as well. We won’t say that is anything wrong with this idea, but you shouldn’t be expecting at anything closer to what ASUS Transformer line has to offer either.

When it comes to its specs, Asus PadFone Mini was initially rumored to be 7-inches, but a more recent listing at Taiwan’s NCC suggests that it could actually be much bigger than that. Even though we cannot know for sure, even the idea of a 4-inch smartphone that slots into a 7-inch tablet dock doesn’t sounds at all bad, also having a resolution of 960×540 pixels. 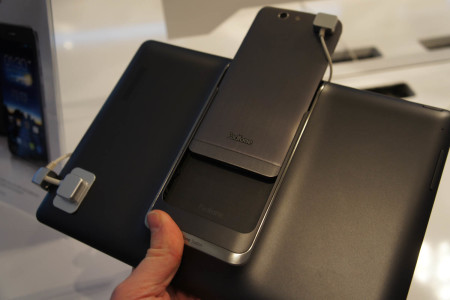 Specs wise, the power of this PadFone Mini will probably be offered by a 1.4 GHz quad-core processor model, but we still don’t know any details regarding its storage capacity. But we must admit that we have a major problem with the fact that it is listed as 3G only. So, for any of you looking for 4G speeds, ASUS PadFone Mini might not be at all an appropriate option.

All of these specs have yet to be officially confirmed and at least starting from here things become clear, according to our source. We already know that PadFone Mini will be released in Taipei next Wednesday (on December 11), so we cannot wait to understand what exactly will offer us, when and for what price tag. And maybe ASUS PadFone Mini’s 4G lack will prove to be just a rumor too, so we’ll keep you updated.