The famous entertaining giant gaming for mobile, Rovio has recently launched its new Angry Birds sequel, Angry Birds Go, and can be available for download on your Google Play Store. If you were used to see the birds flying here and there as cannonballs, now Rovio has sent the action on the tracks, on Piggy Island, where the birds as well as the piggies seem to be a little happy on their karts, racing each other to the finish line. There are plenty of twists and turns, but you have to be aware as the hazardous roads and your opponents riding behind your tail will solicit you to the max.

Perhaps this is the idea, to make you feel like being on a real race: “Ready…Set…Angry Birds Go!” You will be expecting special buttons to use for weapons and 3D racing modes such as Time Boom, Champion Chas, Mega Match and Fruit Splat.

As our source points out, you can race as birds or pigs like Red, Chuck, Stella, Pig, Moustache Pig and other favorite characters; in case you want to upgrade the game at a certain point, you would have to struggle hard to earn extra-points, and thus add a few extra characters.

Another interesting feature of the game is its TELEPOD mode through which you can teleport your characters by placing figures on the camera of your phone. Among other important characteristics, the game also include direct links to any social network websites, some advertisement concerning Rovio products and the option of purchasing apps. 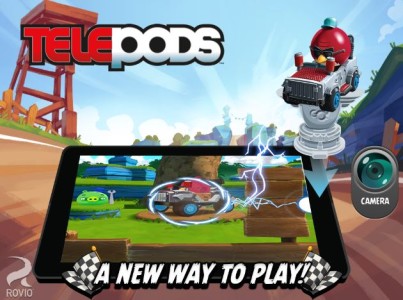 Just enjoy your Angry Birds Go in a wonderful world of 3D modes with vivid colors and gaming surroundings. The game might require internet connectivity and subsequent data transfer may require some charges too. But other than that, it is a free game that can be fully downloaded from your Google Play Store. Just enjoy it!