The unannounced Samsung GT-I9515 aka Galaxy S4 Value has been just approved by Bluetooth SIG. this news doesn’t only comes as a confirmation of existence, but it also gives us the clue that we needed in order to be sure that the Korean company is preparing to officially reveal it in the near future. When it comes to its technical features, we can only tell you that Galaxy S4 Value has been spotted in a benchmark test, so there is no mystery that that is it supposed to share similar specs with its Galaxy S4 I9505 predecessor and to come with fresh color combinations a new Android OS version.

The upcoming Samsung Galaxy S4 Value Edition is expected to come in no less than seven color options: red, pink, purple, blue, or brown along with the traditional white and black and that means only one thing: there’s a color for each taste, so you won’t have to complain anymore that the device that you have doesn’t represent your personality. 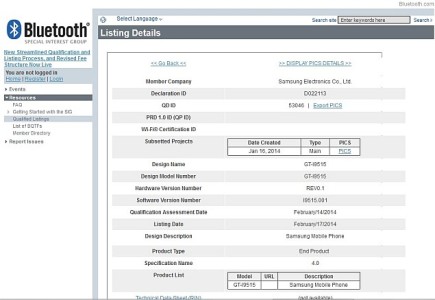 Anyway, we still cannot tell you for sure if the handset will come with the faux leather back that we are used to, previously introduced with the Galaxy Note 3 version, but we certainly hope so. This would make this Smasung Galaxy S4 Value Edition not only extremely comfortable, but also elegant in such an eye-catching material.

When it comes to its specs, we have told you that you shouldn’t expect any differences from the original S4; Samsung Galaxy S4 Value Edition is about to come with the same 5-inch 1080p display and a 1.9GHz Snapdragon 600 processor, but the best part is that its OS is new. This device is running on Android 4.4.2 KitKat, while its predecessor was only launched with Jelly Bean on board, as our source stated. But we still wait for Samsung to confirm all these details that we’ve shared with you.