Royal Revolt 2 is finally available for Android devices all over the world as we are speaking, being back with more battles and even more action than before. Have you previously tried the original game? We can only tell you that it is all about fighting for protecting your castle from your enemies and conquering the kingdoms of your friends. Yes, you are a powerful king that can have the world at his feet, but your chance to reach the top depends on the decisions that you take.

What Royal Revolt 2 has to offer?

What is new in Royal Revolt 2? As you can imagine from the title, you must be careful about how you can solve the problems with your enemies and take care of your own people too. There’s a royal revolt going on, that is something that you should know from the start and you must actually fight for you kingdom! 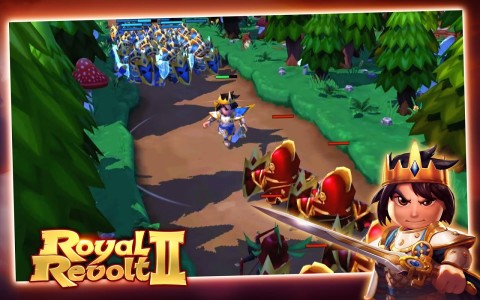 For doing do you must use simple touch controls to lead your heroes into battle, upgrade your troops and buildings, customize your defenses and battle against thousands of players across the world to become the only true king! Yes, Royal Revolt 2 is a multiplayer strategy game with amazing 3D graphics, so be sure that it has all the chances to capture your interest and make your Sunday afternoon a real joy.

And you shouldn’t imagine that Royal Revolt 2 is the only game that has just landed on Google Play for free, but the list is much longer than that. You can also find Smash Hit, Frontline Commando 2 or Swordigo, as being some of the most recent games just released for Android as Royal Revolt 2 and maybe one of them is your next addiction. You wouldn’t be the only one in this situation!