Few days ago we were talking about the release date of Moto X, as a nice timing with independence day on 4th July. Now it has changed a bit and seems like Rogers will offer the Moto X handset starting with 1st August to Canadian customers. Unfortunately no information about the price tag blowed, so still waiting for it. Some pictures snapped from internal documents about Rogers plans were shown and it looks like is a bullet where it is mentioned “EXCLUSIVE Moto X Phone”. This can mean that we would meet the new Moto X for the first time at Rogers.

As per our source the clients targeted are the ones who “live on their phone”. Besides, the dispatching will contain also LTE handsets. Speaking about Rogers activity lately, it has developed its 4G LTE network and enlarged on new seven trades and we can mention Ontario and Ottawa. As it can be seen in the photo below, students are specified, thus we can link it with a promotional price, or maybe an accessible one, even till now, it has never been said anything regarding price. Few weeks are missing for the official event to come, so we will soon know al the details. 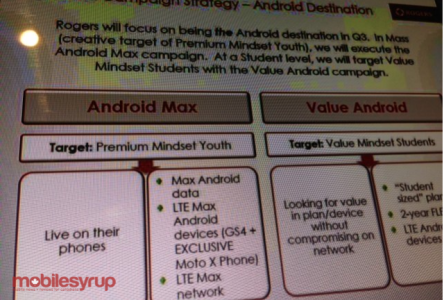 Something new and really interesting about the new Jelly Bean powered Moto x handset, which is going also to be helpful is that it will be able to identify when you are driving and automatically turning on the speakers. Also, it has been rumored that will be so smart to detect your intention of taking a photo and guess what? Will open your camera and everything that it remains for you to do is just to touch the tab and the image will be stocked in your phone. What do you think? Isn’t it magic? In short while these devices will be part of our brain and will know everything you think about.WOW!