The Google “Breakfast” event in San Francisco bought to us the New Google Nexus 7, the successor to the original 7-inch tablet. The 2013 version of the Asus device is 50g lighter, thinner, narrower, better built and with refreshed internals than the previous model. It also was much expected by fans and its release was great news. Bezels on the top and bottom remain large in order for the device to be able to be used properly, while the width has been reduced by over 6mm. The original model had the dimensions of 198.5 x 120 x 10.45 mm, so now you will be able to hold it better while taking pictures, for example.

The screen now has a 1920×1200 resolution and on the back, you’ll find a dual speaker setup with synthetic surround sound software. We were telling you, a few days ago, that the tablet will be released on July 31. Well, rumor has it some retailers already started to sell the device. In the top left corner you’ll find a 5MP camera and a larger, vertical logo saying Nexus. The back plate is harder and soft at touch, unlike the original’s fake leather version. Nice improvements if you’re asking me. But let’s take a look at the New Asus Google Nexus 7 and the internals. 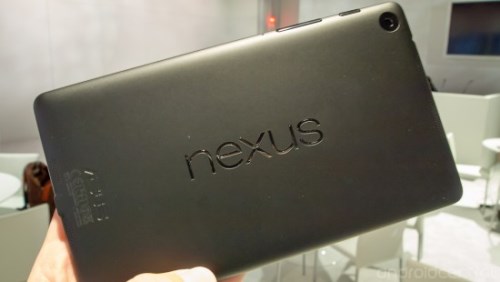 The device features the new Android 4.3 Jelly Bean OS, according to our source, while the internal specs remind us of the Nexus 4: a quad-core Snapdragon S4 Pro 1.5GHz processor, 2GB of RAM, 16 or 32GB of storage and optional LTE connectivity. You also get a 1.2 MP front-facing sensor and a big 3,950 mAh battery for 9 hours of use or up to 300 hours of standby. The WiFi version will be available in the US starting July 30, the LTE version following after a short while. The WiFi versions will be available in other countries for $229 the 16GB model and $269 for the 32 GB respectively.