HTC One Nexus To Be The First Smartphone Who Gets Android 4.3…In July

A new version of Android is announced as the fact Google didn’t release it at the annual developer event. The new version of Jelly Bean, 4.3 was expected to be released on June 10th, but it appears that now is announced for July. It seems that the first device who will experience the new Android flavor, will be HTC One Nexus who will start with stock Android,or the Senseless edition; the initial configuration is still unclear as HTC officials are not giving extra information. But one thing is for sure, Android 4.3 will come to HTC One Nexus, as the leak was confirmed by a trusted  developer this morning on his personal Twiter page. The most important questions are: when exactly this Android will be pushed out by Google and how soon after this will HTC One and Samsung Galaxy S4 get it?

Nobody knows yet if the device will receive the update after its own release on the market witch is set for June 26th  or after the release of the Android 4.3 in early July, but no matter when will come it will be one of the most expected updates in Q2 for both HTC One AND Galaxy S4 users. 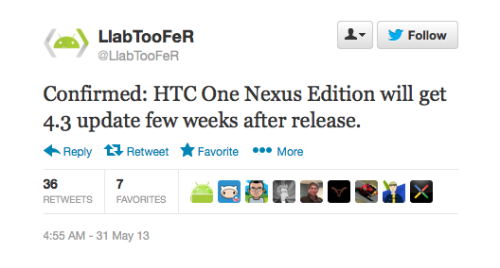 We suppose Android 4.3 is a minor upgrade of Jelly Bean that will bring new camera applications , support for Bluetooth Smart, and will make all the Android devices compatible with others like Fitibit Flex. We also wonder if any of the performaces will be affected, as it happened in many cases of upgrades – even if we encountered happy situations as well- and what kind of improvements will be released or how fast in comparing to the older version will be? We have many questions and few answers, but at least we know one thing: it will happen, and it will happen pretty soon.

As expected, Google is keeping these information “confidential” but we expect to see some leakes in the future weeks as it always happens when an event of this magnitude is expected. We’ll keep an eye on the situation and as soon as something new will pop-up, you will read it here.