Moto G is coming to Republic Wireless in April for $149

Republic Wireless has just announced that Motorola’s Moto G will be officially added to its lineup in April. The best part is that Republic will offer both the 8GB and 16GB versions of this Moto G, the first one coming with a price of no more than $149, while the more generous memory version will have a higher price tag of $179. If this is the handset that you are looking for, it really doesn’t matter what Moto G version you finally choose; there are various plan options to pair it with, as you can discover by yourself in the list below. 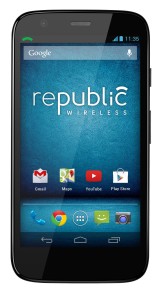 Moto G is coming to Republic Wireless in April for $149

“The Moto G blows every other smartphone in the affordable category out of the water. We are super excited to offer the Moto G with the lowest priced plans in the country delivered by Republic. This well-reviewed device far exceeds the expectations of people who want a world-class smartphone experience for $149,” has just declared David Morken, co-founder and CEO of Republic Wireless. But what exactly can this Motorola Moto G handset offer to its potential buyers?

Republic Wireless’s Moto G specs are similar to the ones found on other CDMA models that have already reached to U.S. shelves. So, we are talking about a smartphone that comes with a 4.5-inch 720p LCD screen and that gets its power from a 1.2GHz quad-core Snapdragon 400 processor coupled with 1GB of RAM. Its 2070mAh battery is promising enough for the price that you are paying, not to mention that the handset runs Android 4.4 KitKat out of the box, provides easy access to Google Mobile services.

So, with this Moto G device your bank account is as safe as it can be and you also receive some specs and features that might not be the best in the current market, but at least they are more than decent. Don’t you think so?