Samsung Galaxy S4‘s big brother, the Galaxy S4 Active, has been announced by Samsung. The new device is waterproof, dust-proof and features 5-inch Full HD display, along with an only 8MP camera, which will take great underwater pictures thanks to the new software, called Aqua Mode. The device has a fully-sealed design and it is being considered an outdoor gadget, thanks to its dust and water resistance. Underwater usage is, however, not recommended to exceed three feet of water, nor 30 minutes of time. The headphone socket is also waterproof and the touch-screen can be handled with gloves.

The Galaxy S4 Active specs will include: 1.9GHz quadcore processor with 2GB of RAM, 16GB of storage and a MicroSD slot. It also has a 2MP front facing camera and a 2600mAh battery. The device will run on Android 4.2.2 Jelly Bean and will be released in three color schemes: urban grey, dive blue, and orange flare. The Samsung Galaxy S4 Active weighs in at 151g and it also features Wi-Fi ac, Wi-Fi Direct, IrDA, NFC, USB 2.0, Bluetooth 4.0 (LE) and LTE. The device comes with the usual Google Apps, including Google Maps, Google Search, Google Play, YouTube and many more. 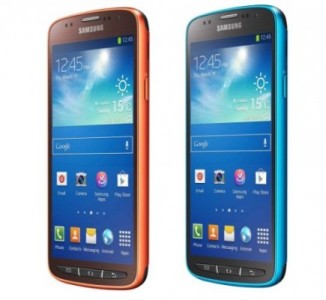 Galaxy S4 Active will be released this summer, first in the US and Sweeden, and later on worldwide. The price has not been unveiled yet. However, the product should be presented at the Samsung event on June 20.
We find it quite interesting for outdoor activity photography and video-making. Besides that, it’s about the same thing as its predecessor, the Galaxy S4 – with lower performances as the specs are not that similar . What do you think about it?