We were hearing, in May, about the fact that HTC might launch a new device called ‘M4’, this summer. Well, recently, an Estonian site, Delfi.ee, leaked a few photos of what appears to be a HTC One Mini. Rumors say that it might even want to be a competitor for the Samsung Galaxy S4 Mini. From the pictures, the HTC M4 seems to be made of plastic, unlike it’s big brother, the HTC One, which had an aluminum body, but we can’t tell for sure. There was a discrepancy between what was rumored and what eventually turned out to be, in HTC One’s case also. Other than that, the two devices physically look alike. The HTC M4 (Mini One) is said to have a 4-megapixel, Ultra Pixel technology camera, just like the larger version.

The same source delivers us some specs of the M4, like a 4.3-inch 720p display, 2GB of RAM and 16MB internal storage, with a 1,700mAh battery. It might be running Android 4.2.2 Jelly Bean and could come with a dual-core CPU. The exact chip has not been yet specified. The Mini One is also expected to feature LTE connectivity.
M4 is just a codename, we suppose the small smarphone is going to be called HTC Mini One. The HTC One was also called, at some point, M7. 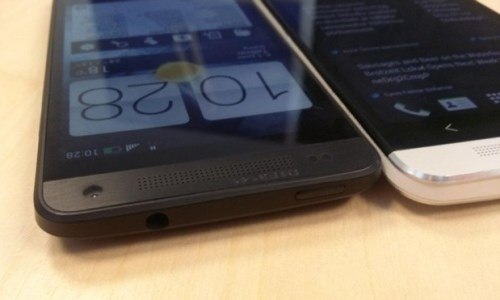 HTC M4 or should we say HTC One Mini?

Sources say that the M4 might be released by the end of June 2013 in 400 euros price tag, but there hasn’t been any confirmation by now.  And the good news is that the phone appears to be similar to the One flagship smartphone and it’s coming at a lower price, so I’m guessing that it will easily “beat” the Galaxy S4 Mini. It’s also rumored that a device with a screen larger than 5-inches will be announced soon by HTC, but we will see about that.