After launching the Nexus 7 (2013 version) on its network, it is rumored that Verizon’s Android tablet selection is about to get even larger than that. The carrier seems to be preparing two new tablet versions: Samsung Galaxy NotePRO 12.2 and LG G Pad 8.3 that have been spotted through the FCC a few weeks ago. Even more, a Verizon internal leaked document is confirming that these models are going to become available sooner than we are expecting at Big Red, on March 6 to be more precise and now we are back with  newpricing information. As for those of you who are anxious (or simply curios) about these Galaxy NotePRO 12.2 or the LG G Pad 8.3 tablets, here we also have some of their most important specs and features that you should know about before taking any final decision:

When it comes to LG’s G Pad 8.3 tablet, we must tell you that it is a modest one as long as it comes equipped with a Qualcomm Snapdragon 600 processor paired with 2GB of RAM, also having a decent 8.3-inch 1900×1200 resolution IPS display.
Unfortunately, it only features Android 4.2.2 OS version at the moment, but we hope that it is going to be updated to Android 4.4 in the near future. 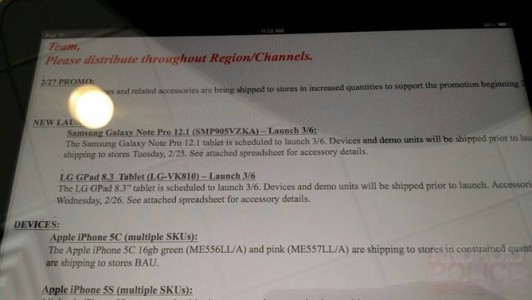 Things are instead much better when it comes to Samsung’s Galaxy NotePRO 12.2 tablet which has an amazing 12.2-inch 2560×1600 resolution display, as well as no less than 3GB of RAM to support its Qualcomm Snapdragon 800 processor. Even more, its 8MP rear cam comes accompanied by a secondary 2MP front camer. And for all those eager to try the latest KitKat version, that’s exactly what this tablet is offering you all.

If you are curious about their prices, we can only tell you that Galaxy NotePRO 12.2 is a high-end tablet currently priced at $750 (WiFi version), so the LTE one should be around $850-900; as for the other LG G Pad 8.3 WiFi model is instead priced at $350, so its LTE version is expected to go for no more than $400-450. So, what do you say about these possible pricing options? Are they tempting enough to make you take in consideration any of these tablets?