Android vs iOS or when Google punches Apple

Nowadays, when we talk about technology, we first think about smartphones, tablets and notebooks. Furthermore, if you ask anybody, having a high-end, or at least a good looking device is something like wearing clothes that are defining your personality; so as some might predicted, now the smartphones and the other gadgets are indispensable for most of us (more, some couldn’t even imagine their daily existence without using such handsets). Anyway, if we are to take a closer look over these aspects we can easily affirm that it is all reduced to Android and iOS as these are the main platforms that are empowering the devices (whether we are referring to phones, tablets and newer, notebooks) that are being available on the market.

Well, that’s not even the beginning of our debate, as when discussing about Android and iOS there are numerous topics and aspects to consider (as you will see we will come with several articles in which you will be able to find all the info needed, along with spicy details, related to Google – Android and iOS –Apple). But, today, during the following lines I would like to discuss about some general things that stands behind Android and iOS, thus that’s why we will try to see why and how things got to evolve in the way it turned out to be. 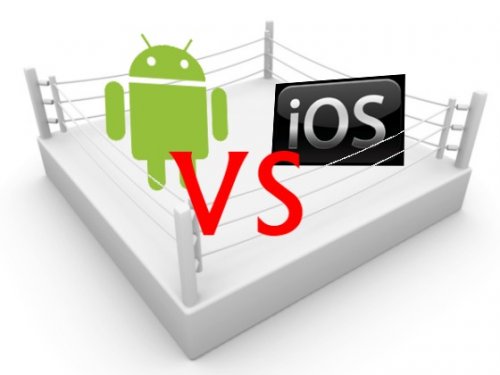 First of all, you should ask yourselves which one was first iOS, or Android because if we want to compare the platforms than we need to know the history. Else, by relying only on the present we might skip some important, possible vital, info (unfortunately most of the users are only interested in choosing a device that looks good though the design should be the last thing to consider when choosing a new smartphone or tablet- we need to know its specs, features, if the performances are suitable for our needs and of course we need to ensure whether the price is fair or not).

Which was first, the chicken or the egg?

When the iPhone was introduced its operating system was dubbed simply, iPhone OS; only after the launch of the iPod touch (September 2007) and iPad (January 2010) those of Apple decided to brand the iPhone OS into iOS. Initially, iOS was designed to work only on the iPhone, but when Apple noticed the huge success, the system was extended to support other Apple devices (starting with the ones mentioned above).

But where was Android and Google while Apple introduced its iPhone and iPhone OS? Well, Google was hardly working in developing the Android OS, while the first device powered by the Linux based firmware has been released in October 2008. So, even though Google unveiled the Android project in 2007 (info about the same were leaked since 2005 when Google backed financially and later bought Android) the first handset to come with its OS was made available when iOS was already popular among worldwide users.

Ok, well until now one thing is certain: Apple was first while Google was trying to recover the distance. So, how could things changed drastically, as nowadays Android is the main OS when talking about users preferences and iOS is trying to bring devices to compete with the ones powered by the Google system?

Well in a few words is all about market strategy; while Apple decided not to license iOS for installation on non-Apple hardware, Google rolled out Android into the wild. So, the main companies decided to port Android on their handsets (first with a little “fear”, though when it comes to Google you can’t make bad decisions) thus new high end, low range, budget friendly and expensive devices were released on the market. So, at first, those who weren’t capable in getting the expensive iPhone, chose to buy an iPhone-look like smartphone that was delivered on a lower price, though the performances were similar.

Anyway, Google is not the only one that chose this marketing campaign, as we now have Windows Phone based handsets while also Mozilla developed its own mobile OS. Of course Android is on top of all because Google stands behind the project, providing powerful features, apps and tools that usually impress the entry level and advanced users.

On the other hand, similar with Apple we have Blackberry, which ports its Blackberry OS (installed only on RIM’s devices). Unfortunately, BB OS is far behind Android and iOS as the QWERTY smartphones aren’t “fancy” enough for most of us (also the devices are more expensive compared with the ones that feature Android OS).

This is how things started for Android and Google; now Android is featured on most smartphones and tablets while iOS is still installed on Apple devices that come with the same expensive price tag. Anyway, the battle between these giants is far from over both companies developing new strategies for impressing their fans and future customers. Stay close for further posts and do share your impressions and thoughts related to this topic with our team. Also, if you have questions or if you want to learn about other Android and iPhone aspects send us an email, or use the comments area from below.