Who hasn’t heard about Samsung Galaxy Gear, would better read this article or browse the site to find out more. As a reminder, the Gear is THE gadget`s number one response to the Apple`s iWatch, a watch with a unique design that does a lot of things. The 320×320 screen OLED resolution is bright enough to let you know what time it is and to notify you on the emails received on your Android phone. It is that device that it is connected to your Android smartphone. But as everything new and still in testing, there were no apps to sufficiently support direct notifications for Facebook and Twitter.

Fortunately, a new update is available for delivering email notifications, updates for Twitter and Facebook, messages for Google Hangouts and Messenger pings and much more. Our reader, who always keeps us posted, namely Gerard Krupa, got the update and passed it to us and hopefully, you will get it too as soon as possible.
But what are exactly the updates for Samsung Galaxy Gear?

Well, first of all, as our source points out in a more serious manner than usual, the update brings you the possibility of changing the notifications in the Settings section of your watch. Once you receive a message from a social media like Facebook or Twitter, a notification will be send to your watch and a visible message will appear on the screen. But to read the entire message, you will have to get access to your phone`s connectivity and log in to the social media. 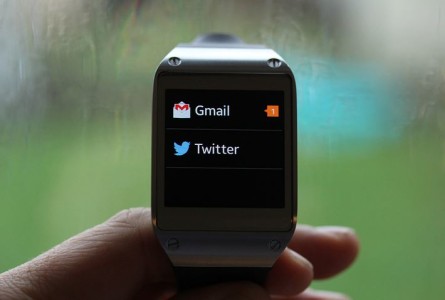 The Galaxy Gear update also features improvements to Smart Relay, meaning that you can easily keep contact with your phone. The lift-and-pause movement activating the clock was also improved.

Apart from some Gmail notifications apps that tend to merge all-in-one at the same time, the update seems to be a step forward to allow other applications, like WhatsApp, make their way into the wonderful device from your wrist. Happy Holidays!