In Q2 2013 the Android tablets have the opportunity to lead the market and they don’t lose it at all. After the Apple’s Ipad line which had the pleasure to stay up in the tops, now it is only 28% and Apple is more than a half eaten by Android. Speaking about the third place in the scale I can remember also about Microsoft’s performances which are not so proudly presented, of a 4.5 percent. Another way of looking to this rise is when you pick to talk about money, about millions. The growth of Android tablets (no matter if we speak about Samsung, Amazon or Google) had an absolutely great increase from 24.6 million units to 36.2 million units. This means a lot of money and a lot of devices shipped and eventually 47 percent growth. 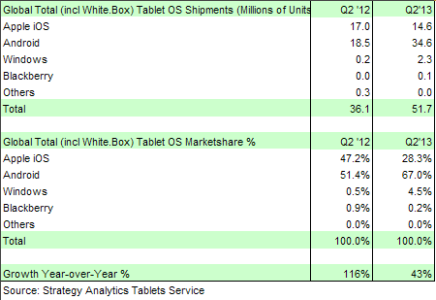 They had great expectations from Apple Ipad Mini which was released in 2012 at the end. They stay optimistic because they trust their brand and probably Apple is going to come back in the front of the pyramid.
Even if the statistics are not looking so well for Apple’s devices, I think this is just a period and they will come back in the limelight. In my opinion, Apple’s products are really competitive and their market strategy will save all that lost percentage in the last quarter.